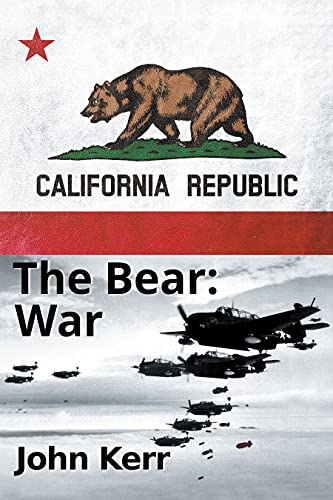 Suspense and intrigue continue as John Kerr, author of a four-book series, adds a volume to his collection. “The Bear: War” (published by iUniverse), the third in a series, follows Michael McGuire and a cast of characters in California as World War II dawns.

World War II has arrived and the City of Angels and its denizens will never be the same again. An elusive woman with a hidden past holds the secret that could bring down Michael McGuire, a successful Hollywood producer, and James Hagen, owner of a major aircraft company. Can they find Nicole Sullivan and stop her from revealing their connection to a 15-year-old incident known as the “Point Magu Massacre?”

“The Bear: War” is an epic adventure covering the war years in Southern California and Japan’s assault on Nanjing, China. It is written with an insider’s knowledge gained through research and personal experiences with the people who lived the history of this era.

“No author has written an epic series using CA history as its backdrop and detailing the myriad of cultures that make up the state,” Kerr states. “Other novels may have focused on Hollywood, none has dealt with the machinations and racism that prevailed in the industry at the time against Asians. The novel also tackles the rarely covered subject of the Chinese experience during World War II”

To get a copy of “The Bear: War,” visit https://www.iuniverse.com/en/bookstore/bookdetails/807531-the-bear-war.

John Kerr grew up in Southern California and attended six different schools by ninth grade, due to a regular request for his dismissal. He has worked as a producer/director for NBC and CBS in Hawaii and as a scriptwriter in Hollywood. He lives in Riverside with his wife, three dogs and two cats. Kerr has made it a point to never live more than 10 minutes away from a good Mexican restaurant.