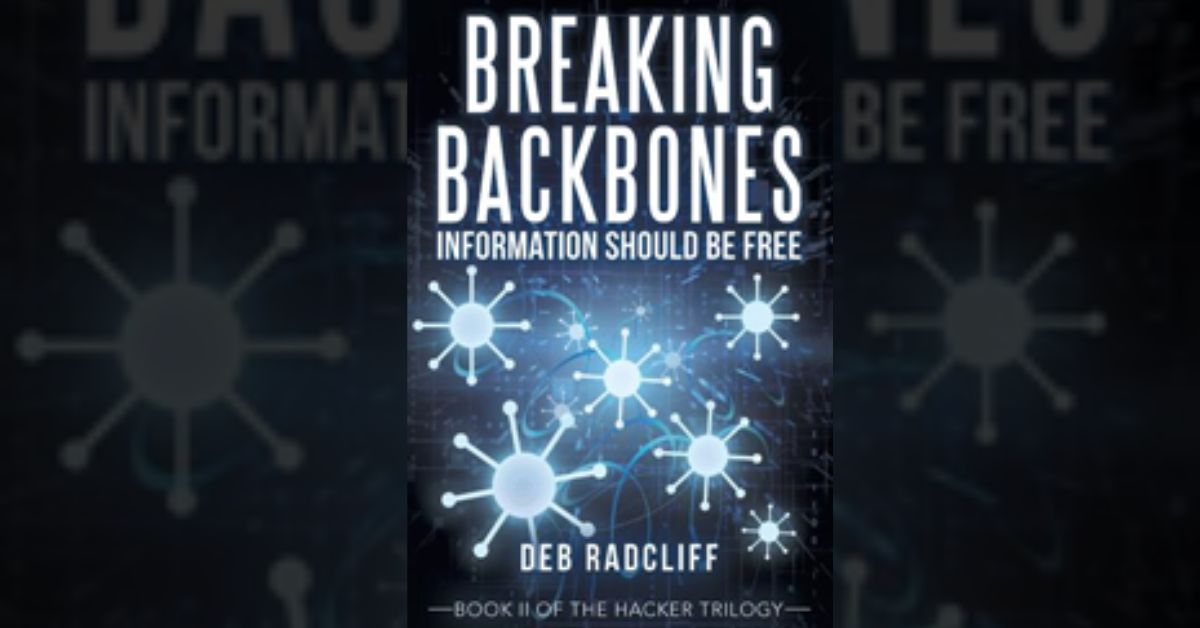 Cybercrime reporter and author Deb Radcliff is happy to announce that her second book in her hacker thriller/adventure series has been published. After successfully defeating GlobeCom in Book One by breaking its network backbones, hacker freedom fighters are now caught in a battle over an artificial intelligence (AI) named Telos that is more powerful than GlobeCom was.

“Breaking Backbones: Information Should Be Free” (published by Archway Publishing), the second book in Radcliff’s “Hacker Trilogy,” revives the characters she drew from in her first book. Like “The Terminator,” in Radcliff’s second book, the younger hackers, including Elven, Michael, and Stonces, come under pursuit by competing forces wanting control over Telos. Cy, who is still recovering from being shot in the back during Operation Backbone nearly three years earlier, comes out of hiding to save Michael and catch Damian Strandeski, former GlobeCom board member and dark net overlord who’s after the AI. But, as they execute their plan, Cy and her team face unforeseen retaliation that endangers them all. Will they finally defeat the Damian and keep the AI out of criminal hands? Or will she lose more people she loves as Damian once again takes control of the world through technology?

“These fictional characters are based on the hackers, vigilantes, cybercops, cyber investigators, and cybersecurity leaders I’ve known throughout my thirty-year career as a cybercrime reporter and thought leader,” Radcliff says. “I consider it an homage to all that they do to try and reveal vulnerabilities in technology and protect society.”

Radcliff’s first book in the trilogy, “Breaking Backbones: Information is Power,” has a five-star rating and was a 2022 finalist in the National Indie Excellence Award adventure category. Visit https://www.archwaypublishing.com/en/bookstore/bookdetails/838543-breaking-backbones-information-should-be-free to get a copy.

“I’ve always seen this as a streaming TV series or a three-part movie series,” Radcliff continues. “Many of my readers like the action, the characters, and the story and say that they are eager to read more.”

About the Author
Deb Radcliff is the first investigative journalist to make cybercrime a beat. Since 1996, she has been embedded in the hacker and law enforcement communities learning their techniques, lifestyles, and philosophies that make them unique. Radcliff has won two Neal Awards for investigative reporting and feels one of her crowning career moments was addressing engineering students and faculty at West Point Military Academy in 2001. Radcliff is still active in the cyber community today as a journalist and thought leader.